Build Your Own Network of Sensors. Order a Developer Kit
In order for the kit to communicate with the network, you must have a properly installed kit that has been provisioned with the network.

For the kit to function on the network, you must correctly set up the hardware, and complete the provisioning process to allow the Millishield to communicate on the network. The following tasks must be performed during initial setup:

Set up the Milli Hardware

To set up the Milli hardware, complete the following:

If this switch is not set correctly, you will not receive CoAP responses from the connected Arduino board. 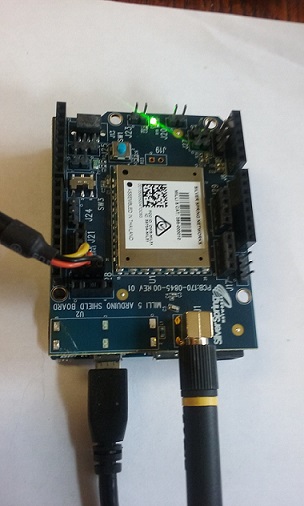 Attach one end of the Micro USB cable to the Native Port of the Arduino board and the other end to your computer.

As an alternative, you can use the micro USB cable to connect the Arduino board to an AC-to-DC adapter or battery (using a 2.1mm barrel standard power plug with an allowed voltage range of 5-20 volts).

The Arduino board will draw power from the power source (computer or battery or adapter) and provide power to the Milli Shield.

You must perform the provisioning step in order for your Milli to reach the network.

With your Millishield connected to a computer, you can perform the necessary configuration and provisioning. The Millishield will not communicate with the network until the Country Code and Network ID have been set and the standard operational firmware image is executing. To set the Network ID and Country Code, launch and follow the instructions as described in the application: Milli Provisioning App

When the application opens, you will be directed to select your country code.

The Milli Provisioning App interrogates all available COM ports and identifies the ones that appear to be connected to a Milli. If a number of COM ports are connected, it may take a long time to examine each port. Please be prepared to wait.

Mac users need to enable access to serial port(over USB) by executing the following commands from a terminal:

The FTDI USB Driver may need to be installed prior to execution.

Use the Country Code in the CC column from the following table. These are based on the ISO Country Codes.

* The CC is the "country code" that will be used to configure the device for the proper country frequency band.

If you received your Milli Dev Kit before March 1, 2019 it is recommended that you upgrade to the latest release of Milli firmware found in Document Center. If you received the Dev Kit after March 1, 2019, the dev kit was preloaded with firmware and there should be no need to update.

Once you have provisioned the Network ID and Country Code you can upgrade the firmware for the Millishield to the most recently posted version.  The steps for that are located here: Firmware Upgrade.

If you followed  either procedure above to update fimware or set the Milli configuration settings then your Milli Dev Kit is ready to use. However, if you did not do either of those then you will need to set the Milli to the operational firmware image by following the instructions here.

It is recommended that you setup the Milli Dev Kit Reference Application. This will give you solid foundation and reference source code to modify for your solution.

This shows the items included in your new Milli Developer Kit. 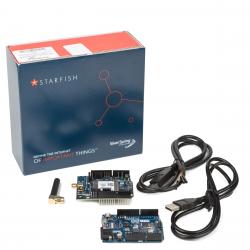