Build Your Own Network of Sensors. Order a Developer Kit
This Getting Started Guide will quickly get you up and running with the Milli Developer Kit for Arduino v1.0 and put you on the path toward building your own new exciting applications.

The Milli 5 Development environment provides all of the tools necessary to enable Itron partners to quickly develop IoT application prototypes with the Milli 5 battery-powered mesh module. For example, with the Milli 5 providing Itron communications for transmission of data over an Itron RF network, a third-party could develop a prototype sensor network to collect data such as:

The Milli 5 Developer Kit is comprised of Milli 5 battery-powered mesh module on the Milli 5 NIC Arduino shield board. Together, these components make up the Millishield, which comes in multiple country-specific variants. These variants are compliant for the following:

The Millishield in the Milli Dev Kit  is a communications processor and can be attached on top of most  regular-sized Arduino boards (such as the Arduino M0, M0 Pro, and Due boards or Adafruit Metro M0 Express board), which serve as application processors. The Milli Dev Kit has been tested for back-to-back CoAP-based communication to the Itron Active Edge Data Platform with one-minute read frequency. 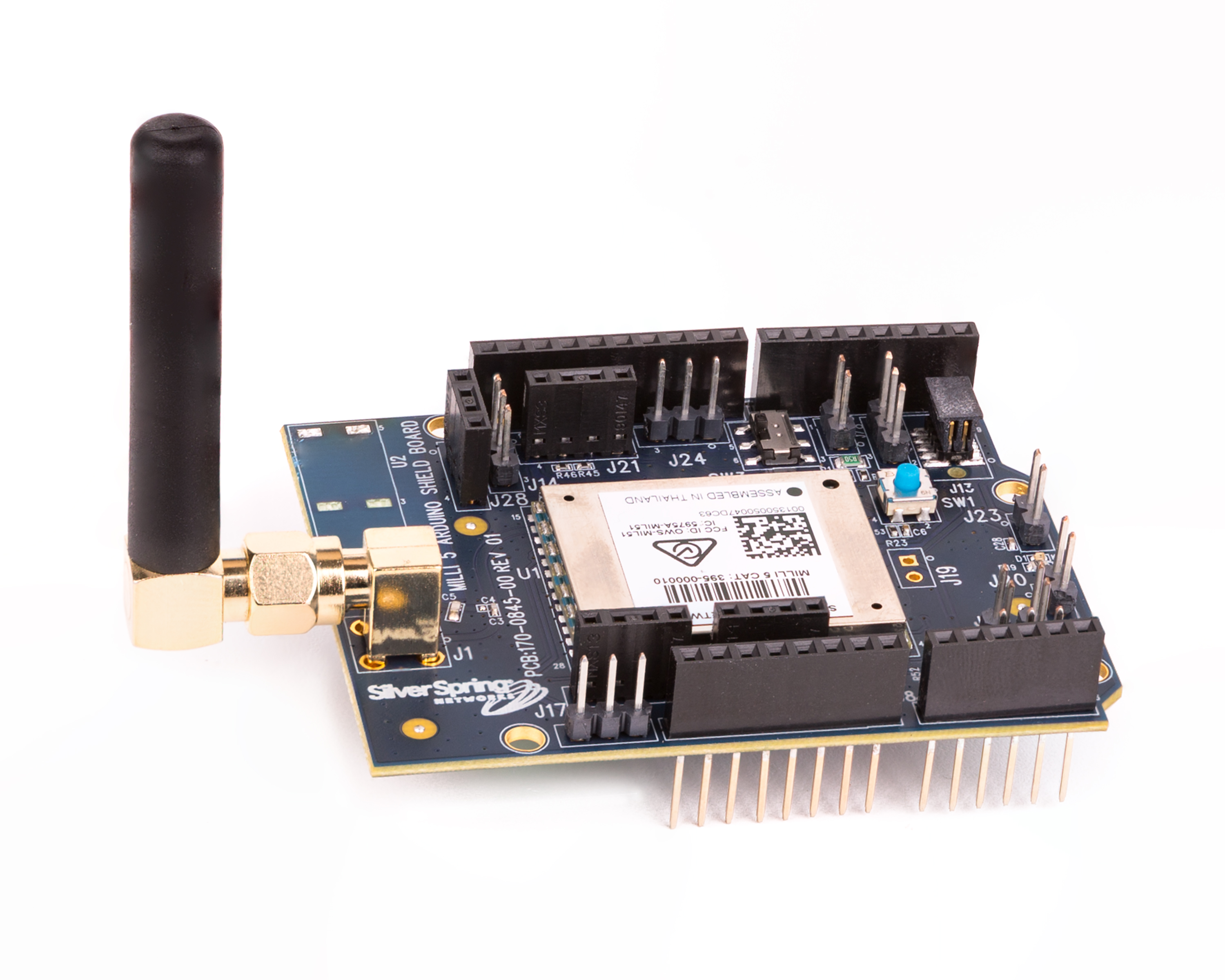 You can purchase a Milli Dev Kit that comes with or without (Singapore only) an Arduino processor board using the following links:

or with the starter kits found in our Dev Kit Catalog.

The following additional items are needed to implement the Milli:

For the kit to function on the network, you will need to correctly set up the hardware (including the IoT Edge Router) and complete the provisioning process to allow the Milli to communicate on the network. Once powered up and provisioned, a reference application is available for installation to get you started with programing on the Starfish platform. Use the following links (in chronlogical order) to set up your Milli device.

This device complies with Part 15 of the FCC Rules. Operation is subject to the following two conditions:

The antenna of this transmitter must not be co-located or operating in conjunction with any other antenna or transmitter.

The device should be installed so that people will not come within 20cm of the antenna.

Changes or modifications not expressly approved by the party responsible for compliance could void the user’s authority to operate the equipment. This equipment has been tested and found to comply with Part 15 of the FCC Rules. This equipment generates, uses, and can radiate radio frequency energy, and if not installed and used in accordance with the instructions, may cause harmful interference to radio communications. However, there is no guarantee that interference will not occur in a particular installation. If this equipment does cause harmful interference to radio or television reception (which can be determined by turning the equipment off and on), the user is encouraged to try to correct the interference by one or more of the following measures:

This shows the items included in your new Milli Developer Kit.